Roots Market is a full-service grocery store specializing in natural and organic produce, meat, seafood, grocery items and more. The market has a loyal following of customers who want to live a healthier, greener lifestyle. Like any grocery store, though, Roots generates a fair amount of waste from cardboard boxes.

Facilities Director, Jack Moore, says that the market’s desire to be both green and economical, led managers to look into purchasing a cardboard baler for their Clarksville, Maryland location. The store was paying a hefty annual fee for use of a shared dumpster, and the hauler was making money recycling the market’s cardboard.

Then Roots considered baling the cardboard themselves. “Instead of hemorrhaging money to have cardboard taken away, we wanted to bale the cardboard ourselves, make money doing it and feel good that we were greening our operations,” Jack says.

At first, the idea didn’t seem feasible. They expected it would be a costly proposition. Plus, the balers Jack and his colleagues initially looked at were too large for the 16,000-square-foot store. They required a 440-volt power source and produced unwieldy 400-pound bales. Then they discovered Orwak.

“The Orwak 3110 Compact caught our eye because of its compact size. It could fit in a little nook,” Jack says. “It also uses 110-volt current and produces bales of 80 to 100 pounds, which are easier to maneuver.”

The Payback - A Net Gain for Roots Bottom Line

As a result of having the Orwak 3110 Compact, Roots has reduced its dumpster pick-ups from six days a week to one, for a savings of about $2,000 a year, and is earning roughly $4,500 annually selling the baled cardboard to a recycler.

Instead of incurring costs, the market is actually saving money. While there are supply costs, Jack says the new process “is still a net gain, and that’s what’s important.”

How pleased is Roots Market with its Orwak 3110 Compact cardboard baler? It plans to install one at its second location in Olney, Maryland.

Roots Market explains how baling cardboard has impacted their bottom line and helped them achieve their sustainability goals. 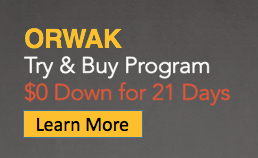 Considering an Orwak Cardboard Baler for your Grocery or Convenience Store?

Try It Risk-Free for 21 Days - No Money Down

With Cost Savings Like This, TGI Fridays Could Shout Out TGFOB! (Thank God for Orwak Balers)